Kim’s Corner: What is Stonewall? 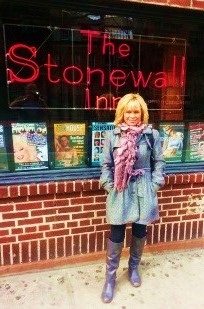 While perusing Facebook, I came across a picture with the caption “no one is born racist” which depicted a Caucasian baby whose hand was outstretched to touch the hand of an African-American man sitting in an adjacent seat on a train, while the baby’s mother stared in the opposite direction.

I firmly believe that racism, discrimination, and hate are definitely learned. Children simply are not born with these characteristics. They are raised and taught to hate others for a variety of reasons that do not justify hate or intolerance.

I recently had the opportunity to travel to New York City and I had the pleasure of stopping in for a glass of wine at the Stonewall Inn. The little bar intrigued me. I researched the bar and found the following information:

The Stonewall Inn, often shortened to Stonewall, is a gay bar in New York City and the site of the Stonewall riots of 1969, which is considered to be the single most important event leading to the gay liberation movement and the modern fight for gay and lesbian rights in the United States.

On March 18, 1967, the Stonewall opened.  It was, during its time, the largest gay establishment in the U.S. and did a very good business.  The original Inn was located at 51–53 Christopher Street, between West 4th Street and Waverly Place, in the Greenwich Village neighborhood of Manhattan.

In June 1999, through the efforts of the Greenwich Village Society for Historic Preservation and the Organization of Lesbian and Gay Architects and Designers, the area including Stonewall was listed on theNational Register of Historic Places for its historic significance to gay and lesbian history. The area included the Stonewall Inn, Christopher Park, and portions of surrounding streets and sidewalks. The area was declared a National Historic Landmark in February 2000.

As with most gay clubs in the 1960s, police raids were common.  The Stonewall Inn was no exception.  The Stonewall riots were a series of violent demonstrations by members of the gay community against a police raid that took place in the early morning hours of June 28, 1969.  At around 1:20 AM, 8 police officers – some undercover, some in uniform – entered the Stonewall Inn and announced that they were “taking the place.”

The raid did not go as planned, however.  The patrol wagons responsible for transporting the arrested patrons and the alcohol from the bar took longer than expected to arrive on seen, and a crowd of patrons and by-standers began to grow outside of the Inn.  The crowd grew as the night went on, eventually becoming so large that it actually intimidated the police officers, who then refused to leave the bar out of fear of the crowd.

The last straw came when a scuffle broke out when a woman in handcuffs was escorted from the door of the bar to the waiting police wagon. She escaped and fought with four of the police, swearing and shouting, for about ten minutes. Bystanders recalled that the woman, whose identity remains unknown to this day, sparked the crowd to fight when she looked at bystanders and shouted, “Why don’t you guys do something?” After an officer picked her up and heaved her into the back of the wagon, the crowd became a mob and went “berserk”: It was at that moment that the scene became explosively violent. The police tried to restrain some of the crowd, and knocked a few people down, which incited bystanders even more. The riots would go on to escalate to the point where the Tactical Police Force (TPF) of the New York City Police Department arrived to free the trapped police officers inside the Stonewall. The TPF attempted to clear the streets, and by 4:00 in the morning they were able to do so.

After the initial riots were cleared, the feeling of urgency and aggression began to spread throughout all of Greenwich Village. The riots would continue to go on for a few more days afterwards.   Unexpectedly, however, the riots turned into altercations between the police and the village people, different from the open violence shown the morning of the beginning of the riots.

Interestingly enough, even people who had not seen the riots at the Inn began to become a part of the aftermath. Many were emotionally moved by the events and began to attend meetings in an effort to take action.

A few months after the rebellion that started June 28, 1969, The Stonewall Inn closed.

Within two years of the Stonewall riots there were gay rights groups in every major American city, as well as Canada, Australia, and Western Europe.

Over the next twenty years, the building space of the former Stonewall Inn was occupied by various other establishments, including a bagel sandwich shop, a Chinese restaurant, and a shoe store.

In the early 1990s, a new gay bar, named simply “Stonewall” opened in the west half of the original Stonewall Inn.  It was a multi-floor nightclub, with theme nights and contests. The club gained popularity for several years, mostly through its young urban gay clientele. Around this time, the block of Christopher Street between Sixth and Seventh Avenues was given the honorary name of “Stonewall Place” by the Borough of Manhattan.

Unfortunately, “Stonewall” closed in 2006, but it was again renovated in 2007, this time supervised by local businessmen Bill Morgan and Kurt Kelly.  As a part of the renovation, the establishment was also returned to its original name (“The Stonewall Inn”).  It has regained popularity and continues to pay homage to its historic significance. The Stonewall Inn hosts a variety of local music artists, drag shows, trivia nights, cabaret, karaoke and private parties.

Since the landmark passage of New York State’s Marriage Equality Act, the inn now offers gay wedding receptions as well.  Kelly and Morgan have also been dedicated to incorporating various fundraising events for a host of LGBT non-profit organizations.

Many look to the riots at the Stonewall Inn as being the birthplace of the modern gay rights movement.  Each year during the New York City Gay Pride March, crowds gather outside the Stonewall Inn to remember and celebrate its rich history.

The significance of the Stonewall Inn has been recognized on screen and stage.  In 1995, the movieStonewall was released. Written by Rikki Beadle-Blair and loosely adapted from Martin Duberman’s book of the same name, the film won awards and was shown at film festivals around the world. The film’s screenwriter then adapted his screenplay for the stage, and the stage version of Stonewall had its world premiere in London in July 2007 before heading to the Edinburgh Festival in August of the same year.

The involvement of bystanders in the riots against discrimination of patrons at the Stonewall Inn is exactly why I am proud to be a member of Spencer Pride and to serve on the Board of Directors.

I would like to believe that I may play some role in educating others.  Knowledge is a powerful thing.  When we really get to know others, it is difficult to hate them for superficial reasons or because of ignorance.  As parents, teachers and even simply as adults, we have the responsibility to teacher our young people tolerance, acceptance, and empathy for others.