This weekend, the Spencer Pride commUnity center was bustling with people there to celebrate the facility’s fifth anniversary.  Hundreds of people came by to partake in rainbow cupcakes & cold beverages.  Visitors were also invited to spin the Prize Wheel, a popular activity first introduced during June’s Pride Month festivities.

“When we opened the commUnity center on September 17, 2016, we didn’t imagine how much things would have changed in our first five years,” said Dana Beth Evans, Spencer Pride’s director of volunteer development.  Evans helped coordinate the plans for the fifth anniversary open house event.  She was very pleased with the turnout & said that it is reflective of the strong support for Spencer Pride’s mission.

The opening of the Spencer Pride commUnity center was a big deal for small town Spencer, Indiana.   When the center opened, it made Spencer the smallest town in the United States with a dedicated LGBTQ+ center.

Spencer Pride organizers reflect that the organization also went through major changes once the doors opened. 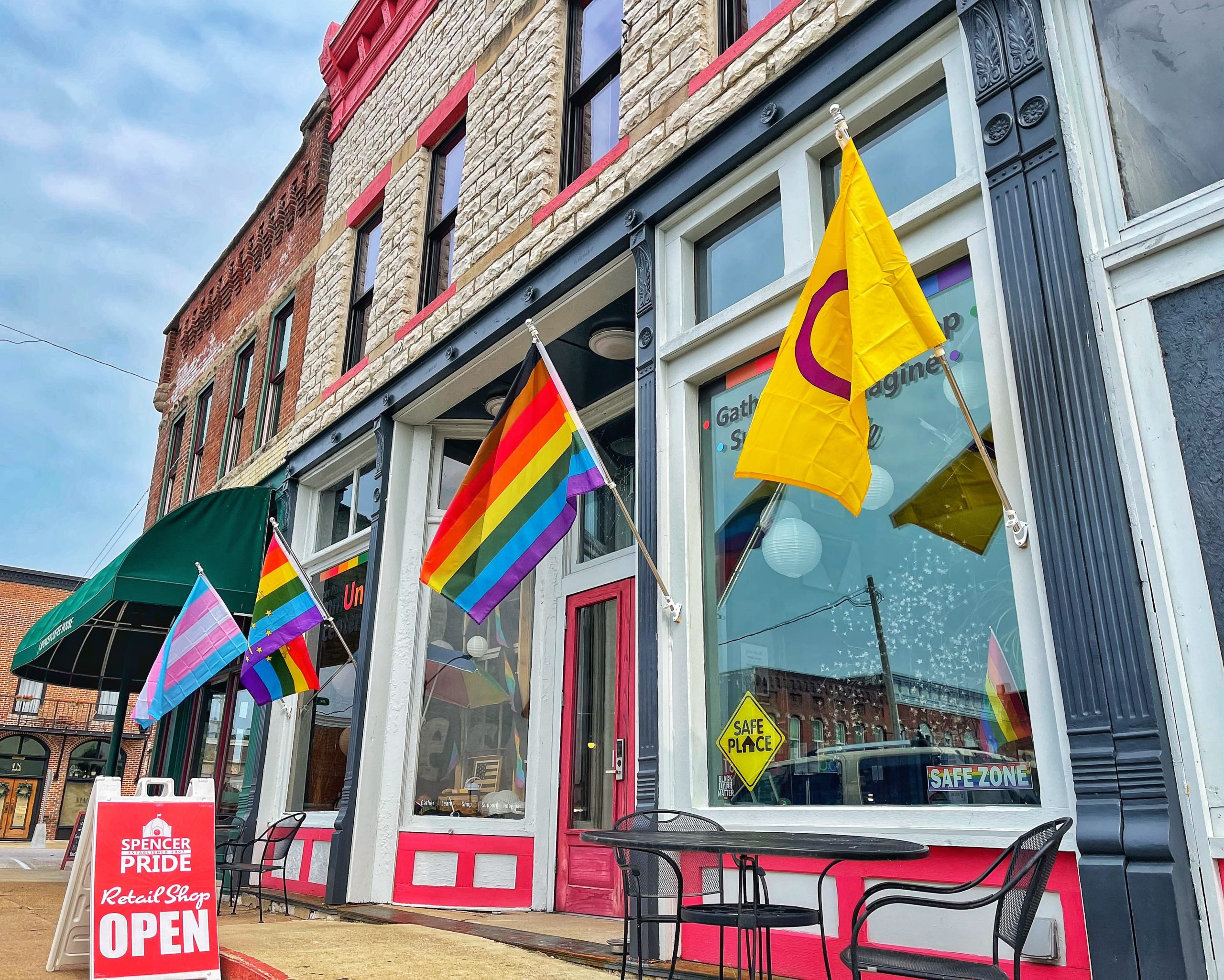 The Spencer Pride commUnity center is a large. beautiful, & historic building in the center of downtown, Spencer. This photo shows the newly replaced exterior of the Gathering Place & retail shop, which were completed in 2020 & 2021, respectively.

“Having a visible, physical location in the heart of our downtown made us more accessible to the public & allowed for us to explore many new programming opportunities,” described Spencer Pride president Jonathan Balash.

Balash went on to describe how the commUnity center first opened on the south side of the square in a smaller, rented facility where they could test out their idea for a physical space for the community.    When that space proved to be wildly successful in bringing in new volunteers as well as demand for new services, the organization embarked on a search for something larger & more permanent, but still within Spencer’s historic downtown.

In January 2018, the organization formally re-located the commUnity center to its new location at 17 E. Franklin Street, directly across the square from their prior space.

In the time since they purchased the 120+ year old “Improved Order of the Red Men” building, Spencer Pride has invested significantly to transform the space for their current needs & to develop plans for further improvements to allow for new & improved services.

Judi Epp, Spencer Pride’s director of fundraising, describes how funds from their supporters have been used to rehabilitate the Franklin Street building.

The new commUnity center roof, as seen from above in early 2021.

“After initially investing funds to get the first floor space ready to move in our retail operations & meeting space,” she said, “we quickly turned to some high priority projects that were needed to secure our building’s long-term structure.”  The first of those high-priority projects was the replacement of the three roofs, which had been in profound disrepair.  Forty thousand dollars later, the organization proudly announced that the work was finished in mid-2019.

Epp went on: “We did make a lot of other, smaller, improvements in the commUnity center while we raised money for the roof.”  Those projects were generally undertaken by volunteers, of which the organization has many.  From exterior paint to technology upgrades to iterative improvements throughout the retail space, restrooms, & meeting room, Spencer Pride’s team never stopped their efforts to further their dream of a full-fledged LGBTQ+ center.

Thanks to some key donors like Rex Hinkle (Spencer Pride’s outreach director) as well as several large grants, the Spencer Pride commUnity center has transformed before the eyes of the community especially in the past 18 months.  In that time alone, the organization has completed the exterior façade replacement for the retail shop & Gathering Place. 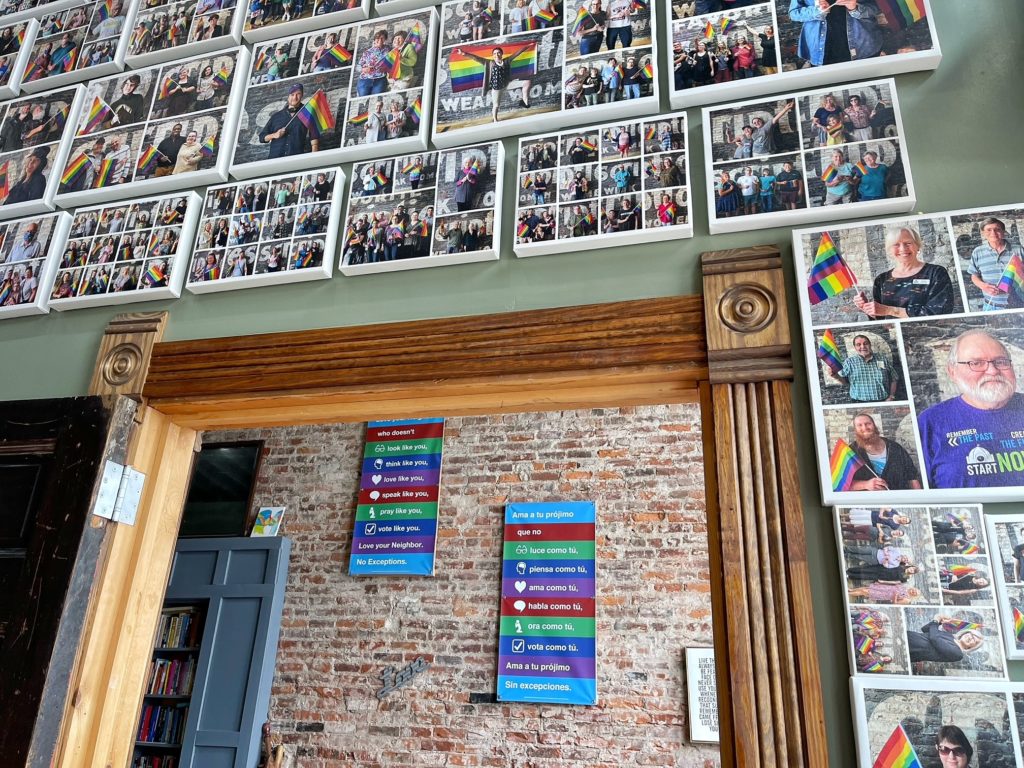 It has finished the interior work in those spaces as well, including major technology upgrades to support the significant activity that takes place at the center.

Hinkle, who is president of Cook Aviation, serves on Spencer Pride’s board of directors & is a strong supporter of the organization.  “I feel so strongly about our mission & the incredible work that is being accomplished here,” Hinkle exclaimed when asked about his support of the façade work.  “There is no other place like Spencer, Indiana, & Spencer Pride!”

Additional building improvements since June 2020 include:

In August, Spencer Pride launched the first fundraiser in support of their next priority project, aptly referred to as “Moving On Up.”  The fundraiser raised $13,700 towards work that will repair a rear, exterior wall that is leaking.  This leak is preventing further interior improvements in the building’s stairwell, hindering utilization of second floor space.    The second fundraiser for this project will kick-off during Spencer Pride week from October 11-16, by raising the funds needed to complete the interior work.  The overall goal of “Moving On Up” is to complete the back stairwell, thereby allowing for public access to the second floor for programming expansion.

Individuals wishing to support “Moving On Up” are encouraged to visit the commUnity center during Pride Week.   The 2021 Spencer Pride Festival takes place on Saturday, October 16.  Individuals attending the festival will have the opportunity to check out many of the exterior & first-floor improvements at the building.   More information about the Spencer Pride Festival can be found at www.SpencerPride.org/festival. 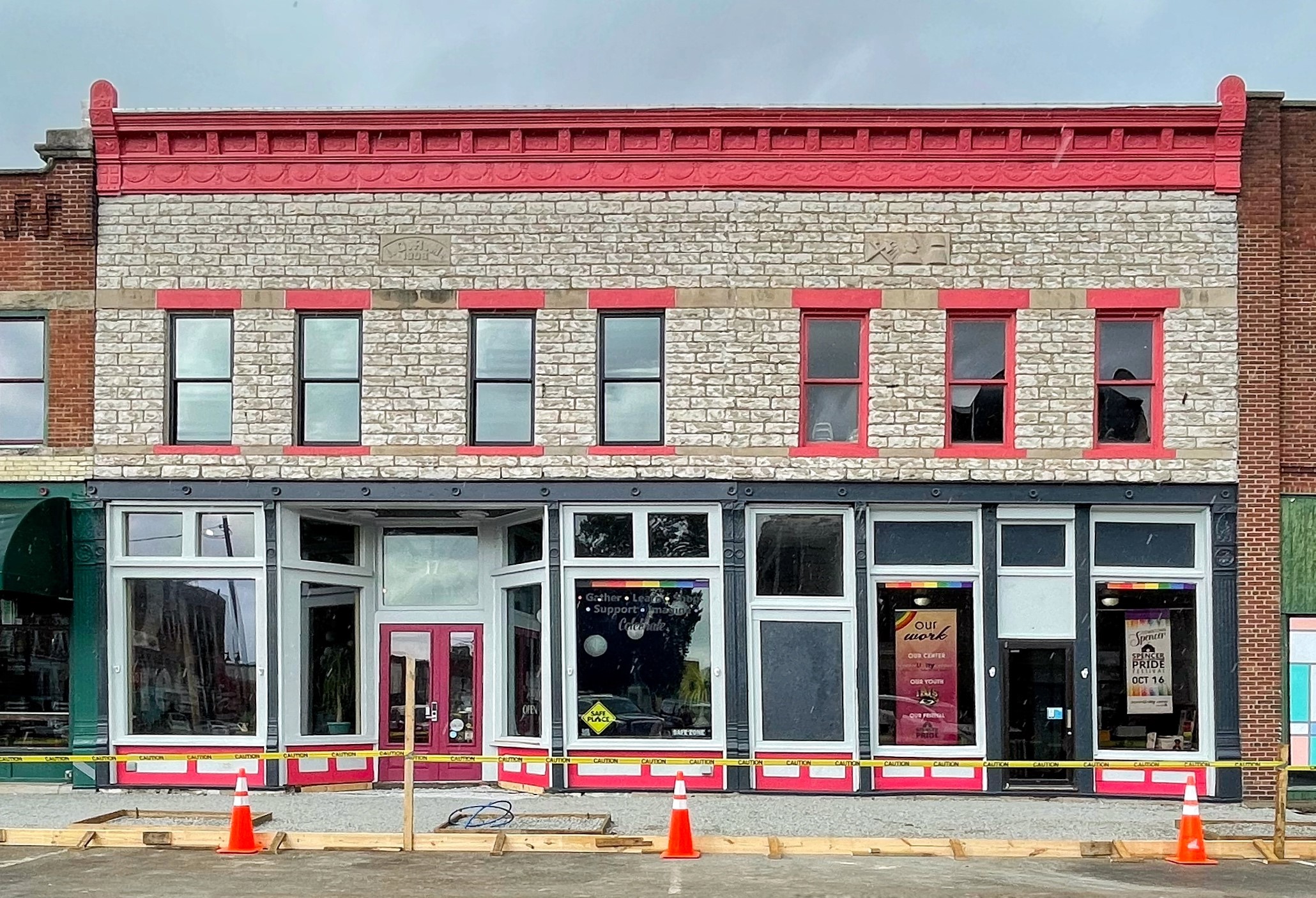 This photo, taken on September 20, 2021, shows the newly demolished sidewalk. New sidewalk will be poured at the center in the next few days, ensuring a safer & more beautiful outdoor space for the 2021 Spencer Pride Festival on Saturday, October 16.

One final note: as of the publication of this article on SpencerPride.org, the entire sidewalk of the Spencer Pride commUnity center has been removed & new concrete will be poured within the next few days.   This cost for this project is shared with the Town of Spencer & will result in a much safer & more beautiful sidewalk on the north side of the courthouse.   Three trees will be installed in front of the commUnity center that will eventually offer some welcome shade, in addition to some wonderful color, to the outdoor space.

Although Spencer Pride has made major progress at the commUnity center in its first five years, organizers have a lot more in store for this important space downtown.   Follow Spencer Pride on social media for routine updates on the building’s progress, as well as on the many events & programs hosted by this all-volunteer organization in the heart of rural Indiana.