Spencer Pride Inc. Stands Up in Support of Marriage Equality and in Opposition of HJR-3 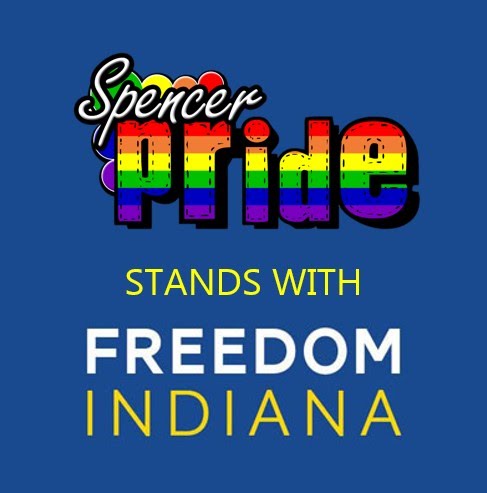 SPENCER, IN – Spencer Pride, Inc. stands alongside Freedom Indiana in opposition to the Marriage Discrimination Amendment, titled HJR-3 (formerly known as HJR-6). This amendment opposes marriage equality for Hoosiers and we believe this is contrary to the mission of Spencer Pride, Inc.

The Indiana General Assembly will likely pass HJR-3 in this session, but there is still the possibility that equality-minded and freedom-loving Hoosiers can turn the tide on this issue and prevent the Marriage Discrimination Amendment from passing. The amendment passed the Indiana General Assembly two years ago and if it passes again this year, it will be placed on the ballot as a referendum for the voters in November 2014.

“We dealt with the marriage bill 3 years ago.” Representative Heaton noted. He had voted in support of the amendment then. “I will vote for it again,” he stated.

Senator John Waterman, in his opening remarks, had noted that the state was “having a hard time attracting business.” Regarding the amendment, he reiterated that his position of supporting the amendment will not change. “I’m confident,” he said, “that it will move through the House and then go on to the voters.”

Spencer Pride Inc. president Jonathan Balash was the first citizen to speak at the breakfast after their opening remarks, and he pointedly asked both legislators about the source of their support.

“Setting aside all issues about human dignity, equality, and the rights of Hoosier families to choose how they want to manage their own families,” Balash said, “and setting aside that this amendment goes against the concepts of limited government and individual liberties, why then do you support this amendment?” He pointed out that major companies such as Eli Lilly and Cummins have been very vocal in their opposition to HJR-3 and have stated that if this amendment passes they will have a hard time attracting talent to come to Indiana for employment. Balash recalled the Senator’s comments about having a hard time attracting businesses as the continued outcome for Indiana if the discriminatory amendment were to pass.

“I won’t flip-flop on that,” Representative Heaton stated.

Rhetorically, Balash then asked the legislators if all rights should be put in front of the voters as a referendum. “Should we just give everyone a scantron and let them decide who should or should not have rights in Indiana? Should we let them put limits on rights based on race, and age, and other factors?” Neither legislator responded to this inquiry.

The topic didn’t end there. Two additional attendees, both volunteers of SPI, spoke out in opposition to HJR-3. These individuals included secretary Judith Epp and Balash’s husband Jacob.

“Government is supposed to protect the rights of the minorities,” Judith Epp told the legislators.  “If the voters in the south were asked to vote on bi-racial marriages back in the 60’s, they would never have approved it.  That’s where the government has to step in.”

Many of the attendees were supportive of the positions expressed by the Spencer Pride Inc. attendees, although the topics of the session eventually transitioned to other issues raised.

HJR-3 is still in a House committee, but in a surprise move this week the Speaker of the House transferred the bill from the Judiciary Committee to the Elections Committee. This decision was made because the Judiciary Committee, which was once thought to guarantee passage of the bill, became deadlocked. Four hours of testimony was heard by the Judiciary Committee last week and apparently it swayed committee members enough to cause concern over whether or not HJR-3 would be able to go to the full legislature for vote in the time left of this short session. Hundreds of Hoosiers attended to show their opposition to the passage of HJR-3. Included in that group of supporters for marriage equality were several volunteers of Spencer Pride Inc, including director Kim Fidler.

The transferrance of HJR-3 from the Judicary Committee to the Elections Committee increases the likelihood of the bill passing.  It is expected that the vote will take place today.  Freedom Indiana is coordinating a rally at the Statehouse today.  The public is encouraged to attend, and if possible, to wear red in support of ‘love.’

Freedom Indiana is a coalition formed in opposition to the Marriage Discrimination Amendment.  It has been critical to the increased visibility of this issue. Freedom Indiana has also been critical in aiding in public awareness (including both the general public and with individual members of the Indiana General Assembly) about the harmful effects of HJR-3.

Spencer Pride director Cathy Wyatt has been prominently featured in Freedom Indiana’s “Mothers for Freedom” campaign.  Wyatt and her husband Dan continue to be outspoken in opposition of HJR-3.  Their son Eric, is a gay man.  They joined the effort to show their support of his right to marry and to help persuade others to join them.

Spencer Pride Inc. has been a coalition partner to Freedom Indiana for months, and we are proud to continue that partnership until we all see the successful end of this discriminatory amendment.

For more information about this issue, or to see ways that you can be involved in this effort, please visit Freedom Indiana’s website at www.FreedomIN.org.

For citizens wanting to attend next month’s Legislative Breakfast in Owen County (which will be sponsored by Spencer Pride, Inc.), please contact Judi Epp via e-mail at Judi@SpencerPride.org.